After a several months of rehabilitation after cold stress, three Kemp’s Ridley sea turtles were medically cleared and returned to Playalinda Beach at Canaveral Seashore this morning (June 27, 2013).

Two of the turtles had pneumonia and the third had a small wound to its carapace (shell). According to SeaWorld, “The Kemp’s Ridley sea turtles measured approximately 70 centimeters in length and weighed 7 – 10 pounds, all gaining approximately 3-6 pounds” while at SeaWorld.

The turtles were part of a group of 36 brought to SeaWorld Orlando by the U.S. Coast Guard on December 23, 2012 from Cape Cod, Massachusetts. Of the 36, this release marks a total of 34 of them being returned to the sea.

So far this year, SeaWorld Orlando has rescued 45 sea turtles and returned 35.

This is one of the many turtles rescued and rehabilitated by the SeaWorld team.

I’m so excited that the sea turtle that had a 4-inch-long hook in its throat will be returning home to the waters of Cocoa Beach soon! Thank you SeaWorld and Inwater Research Group for finding and taking care of this beautiful animal and to the vets who removed the hook and helped it make a quick recovery! 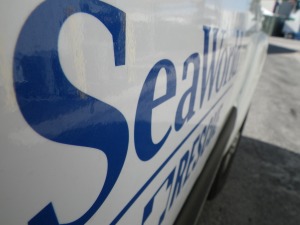 SeaWorld Rehab Teams Are Ready to Roll when and where an animal needs them.

“The turtle, a sub-adult weighing approximately 100 pounds, was rescued from the intake canal at the St. Lucie Power Plant in St. Lucie County, Fla. The animal arrived at SeaWorld Orlando February 26 and immediately underwent surgery following x-rays and blood work procedures. Vets removed a 4 inch-long fish hook, and after a speedy recovery, the turtle is now ready to be released back into the wild.

The loggerhead was found by the Inwater Research Group – an organization committed to the research and conservation of coastal species and habitats – who also assisted in the animal’s transport.

According to SeaWorld veterinarians, the fishing hook was one of the largest the team has removed to date. To help protect this threatened species, make sure fishing line and all trash is disposed of properly. When fishing, use new “circle” hooks – turtles are less likely to swallow the circle-shaped hooks than traditional J-shaped, which cause suffocation or internal bleeding when swallowed. Also, if a sea turtle’s nest is seen, please contact authorities.

This year, SeaWorld Orlando has rescued nine sea turtles. For 45 years, SeaWorld Parks & Entertainment has helped animals in need — ill, injured and orphaned. More than 20,000 animals have been rescued by our experts.‪ SeaWorld’s animal rescue team is on call 24 hours a day, 7 days a week. ‪”